The second day we were in China,
the day before we met the boys,
we thought it would be fun to trek across the pedestrian bridge and check out life off of the island.

Yes.
Yes this is the same bridge where I temporarily lost Justin a week later but we won't talk about that because it still gives me shivers...
so anyhoo,
we hiked across the bridge.

And my blood pressure shot up a notch or 12.
So
so
so
many people and I was incredibly nervous I was going to lose one of the kids. (again, little did I know....but we're still not talking about that...)

So we hastily walked around, I pretended that it was super fun, and then headed back to the island.
At which point through a very fake smile I said, "Well that was fun, we should do that again before we leave!"
hoping to not let on how much nervousness I really had.
To which Jordan replied,

"No way, I like fake China. Real China freaks me out."
I guess he found it to be slightly overwhelming as well.

Ha.
"Fake China".
Crackin me up. I thought that was such a good description of what the island is like.
It's China.
But it's definitely not "Real China."

Fast forward a few days and we were kickin it with Lilly's family and I shared with Angela that we had been to a bookstore that we wanted to go back to over in Real China.
Well, let me tell you, she tells this story better than I do,
but she thought that was a pretty good idea and that she wanted to go to the bookstore too.

She was telling me this story over dinner about how her guide didn't know about the Real China Bookshop and could I please tell her where exactly it was.
At which point I nearly spit my orange tea out all over the table from laughing so hard as I explained that that was not the actual name, but just what we called it.
Ha.
Still makes me giggle just thinking about it.

Alas, we ended up heading back over to Real China to show them the bookstore. 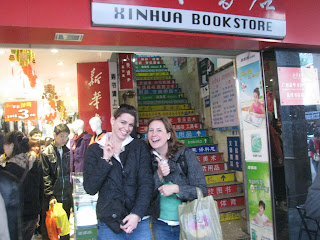 And in case you too, want to go,
now you have the real name....cuz the Real China Bookshop....isn't quite gonna cut it.