You are not going to believe this but I have - gasp!- actual pictures to show you of Joey and Jacob.
Go ahead,
be shocked,
I'll wait.

1 month home and life is goooood.
Their English is coming along remarkably fast.
They speak to each other about 95% of the time in Mandarin but every now and then we hear them mix in a few English words with their Chinese.
Chinglish at it's finest.
Chinglish is my new favorite language, it's especially cute coming out of these two little people. 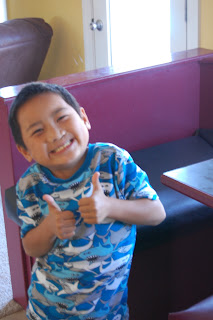 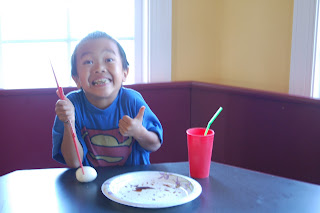 We have learned how to think more abstractly when listening to them.
For example I told the boys we were going to go to the store on Sunday to buy out the produce section....again, stock up on more fruits and veggies.
But I failed to tell them what time.
So after church as we are walking to the car Jacob begins gesturing to drive and outlining a square and saying, "Apples, Oranges, Bannanas,..."
Well, that meant store.
He wanted to know if we were still going to the store.
It's charades on steroids.

Blows my mind that we have been home a month already.
Since the first two weeks we were all basically comatose it kinda only feels like we have been home a little while.
Yet every Sunday that we walk into church it dawns on me how far they have come that week.
And then the next week
and the next week.
It astounds me how relatively seemless this transition has been.....again, the first two weeks not withstanding. ;)

We still....of course....have our hiccups here and there.
Joey still shows no discernment as to who he will go to/cling to.
So in that respect I'm not sure that he really views us any differently yet than any other person on the street.
And along those lines, I came across this post the other day, which I highly recommend adoptive parents take a moment to read...
it just screams Joey to me.
Though honestly it's hard to know how much of this is just his personality or how much he is being "artificially charming."
My best guess is that it is a combination of both.

Jacob is doing 300% better than the first couple of weeks.
He is one ridiculously smart boy and I think the lack of communication was driving him kah-razy.
Now that he can tell us things he is much, much better.

So 1 month home, and we are family.
Simple as that,
just a family.
One big crazy Jesus lovin adoptive family.

Ok, I just realized that was only two pictures....that's probably not enough. If I wasn't so lazy busy sipping my coffee I'd get up and get the memory card out of the camera......but indeed....I am that lazy busy so I'll try and add more later.  Peace out.