Baseball game began Thursday night at 6pm.
At about 6:15 Jason was hit.

Turns out it was a 92 mph fast ball.
I know this only because the other teams pitcher is ginormous
incredibly talented
and was being scouted by scouts with radar guns pointed at him.

At first I thought he had just lost a tooth or two.

Psssh.
No bigs.
We will deal with that after the game.

It's how I roll.
And I know it's how he rolls.
This was a big game after all.

But then after about 5 minutes of spitting up blood he said,
"Mom, my face is numb."
only it sounded like
"Maaww mi fasssss iz num"

And I don't know much.
But I knew at that point it was more than a tooth.

So off we went to the nearest acute minor illness clinic with xray capability.
They took him right back and
shockers
they thought his jaw was fractured at the point of impact without even doing an xray yet.

And a bit of trivia here for you:
Apparently mandible fractures don't show up on regular xrays.
Nope.
Tis true.
They said he needs a dental panoramic xray
or a CT scan.

Neither of which they have there.
So off we go to the local community hospital.

It was at about this point that a lesson or two from high school physics began to climb through the cobwebs in the recesses of my brain and I remembered something about force
and energy
and how all of that force and energy has to go somewhere...
And in Jason's case it impacted and then reverberated through his mandible and broke the other side.

So a few hours later....circa 12:55 am....after communicating with the local children's hospital, loading him up with anti-inflammatory meds to combat the excessive swelling, fluids and some antibiotics they loaded him up in an ambulance and we were told to expect surgery first thing in the morning. 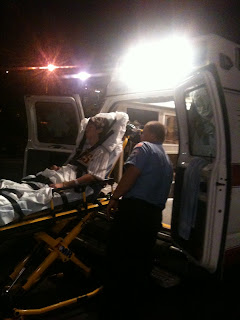 But God.
He is so much bigger.

Radiologist and surgeons at Children's the next morning looked at the images and saw the same fractures the other hospital saw,
but
miraculously all of his fractures are perfectly aligned.

Their decision?
Surgery smergery
Let's get this boy home.

Yep.
It's where he be after only one night.

He is on a liquid diet until early next week when he goes back to the surgeon for another round of images to see if the fractures are still aligned. If they are, they leave it be, because if it has held in place for 3-4 days....odds are it will stay aligned and the bone will begin to graft back together.

If the fractures are off set next week then they will have to operate, align his jaw and wire it together until the bone fuses back together in the correct position.

Satan get behind me.
My God is bigger.

So here we are,
Saturday afternoon
and Jason is soaking in all of the love and milkshakes one boy can handle.
His baseball coach and his wife stopped by with the District trophy,
his teammates came by with a giant banner signed by his freshmen class and friends
our incredible, awesome, loving small group provided us dinner
milkshakes arrive at our house a few times a day
gift cards for just about every restaurant in town that serves any form of ice cream
a NERF bat and ball....which totally cracked us up
Love. Poured. OUT.

Thank you all for your support, the power of prayer and the work of the body of Christ continue to amaze and humble me each day. We are ever, ever, grateful.