We Had An Intruder

It was around 2:55am
scratch that
it was 2:55am
because I rocketed out of bed and looked at the clock and saw that it was in fact exactly 2:55am.

And by "rocketed out of bed"
I mean I sat up bleary eyed and glanced at the clock.
And then I laid back down.

But then I heard it again.
That noise.
A cross between something falling
and something being shuffled around.

So I did what all normal people do.

Eyes wide open.
Waiting to hear the noise again
so I could
ya know
better formulate my plan of attack
which I'm pretty sure would have involved lipstick, acne cream and a hairbrush as they were the defense mechanisms currently available to me.

So I didn't go down to the basement.

Nor do we actually have a basement.
Which was incredibly helpful in that no-basement-going decision.

Instead I laid in bed
waiting to be slayed in some awful manner
because that's better than the basement?
I dunno.

1. We live on a pretty heavily fortified military installation.
2. These peoples have guns...big, big guns.
3. I wonder if instead of protecting us they are playing cards or watching TubeYou which is why there is now an intruder in our home about to slay me in some awful manner.
4. I wonder what Jesus will look like when I see His face in a few minutes.

And then I heard it.
That noise again.

And it was then that I realized it was more of a Jack grinding his teeth at night sound
and it sounded like it was coming from somewhere around our bed.
So I ever so slightly picked my head up
(as to not startle the intruder, pffft duh.)
and looked on the floor.
And it was then in my bleary-eyed sleep fog that I saw Jack lying there on the floor.

I am not about to perish.

It is just Jack grinding his teeth.

So as I settled back under my covers convinced I would live to see another day I heard it again,
louder and different this time
and as I sat up a little more alarmed and a lot more awake I realized....

that's not Jack lying on the floor next to my bed
that is the pile of clean laundry that I shoved off the bed last night and did not fold and put away like a good lil housewife. Jack is in fact sleeping soundly in his bed down the hall.

There actually is an intruder.

But the more I lay in wait
the more and more
and ever more
convinced I became that it wasn't an intruder of the human variety
but rather a mouse
or worse
gasp
a squirrel.

I haven't seen any mice here
but squirrels?
Well, they are a plenty.

And I heard it again,
munch munch munch
and again
munchmunch
scrape
shuffle

Yep.
It just simply must be a squirrel.
Though of course that makes absolutely no logical sense to me sitting here
well caffeinated, wide awake, in broad daylight at 12:10 pm
it made perfect sense in the dead of night. Justsoyaknow.

It was then that I figured I had two options:

1. Wait for the squirrel to pounce out of it's current position and impale it's tiny little claws into my face circa Chevy Chase and the Christmas tree scene

2. Get up, close the door behind me, stuff a towel under the door so it couldn't get out, and go sleep on the futon and deal with said squirrel issue in the morning.

I would be remiss at this part of the story if I did not mention the fact that my husband was soundly sleeping next to me during this whole ordeal.
And that yes,
part of Plan B was to leave John asleep in the bed, barricaded in the room with the rabid squirrel while I sought refuge outside the danger zone.
And yes,
I still chose Plan B.

And yes, I am an awful, awwwwful person.

Judge me.
Hate me.
Love me.
Loathe me.
I, apparently, have a strong sense of personal preservation.

I gathered my strength
took my courage
left my dignity at the door
{because you cannot possibly bring your dignity with you when you are leaving your husband behind to survive on his own.....asleep}
grabbed my pillow and tip toed out the door to execute Plan B.

I got out into the hallway
closed the door behind me
and that's when I saw it.
A pile of Tim.
A ripped,
torn,
unrecognizable pile of what used to be Tim.

Yep.
That be'd Tim Tebow of course.
Or..
use to be Tim Tebow. 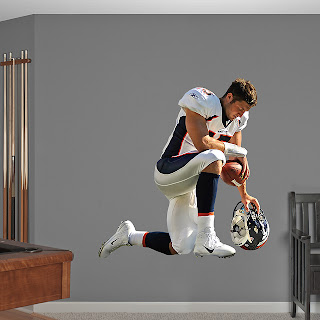 and now
well,
it doesn't.
And all that munching, scraping, ripping, sound?
Was Tim extricating himself from the wall of the hallway right outside my bedroom door.

Vindicated
and slightly ashamed that I was really willing to let my hubs die by squirrel death
I happily pranced right back to bed and was back asleep in just under 10.4 seconds.

I hope you all don't think less of me.

Heck, I think less of me.
Never mind.