I'm Not Sure She Understood.

A wittle story for you:

I never never drank coffee
until I had newborn twins
and then....
well.....
you's gots to do what's you's gots to do.
Over the years as my addiction compulsion increased I have tried many a variety of creamer.
Loralie Gilmore ain't got nothing on me.
Many a flava flav.
Many a brand.
And it wasn't until this delicious creation was sent down from Heaven itself that I have been hooked on this one and only this one. 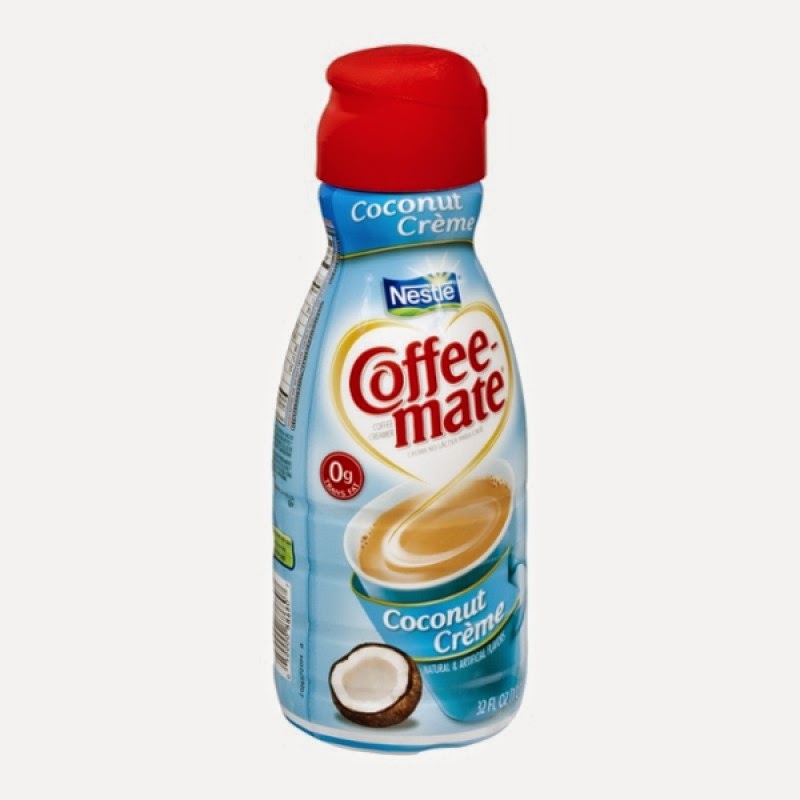 It's been years now.
Years.
And this is my friend.
It greets me every morning.
It says hello and welcomes me with it's aloha coconuty aroma and it's all manner of things that are bad for you but I can't bring myself to care because it's so yummy.

And so it was that I ran to the grocery store the other day.
I was out of coffee creamer.

Did you catch that?
Out.
Of.
Coffee.
Creamer.

Problem is....I approached the dairy case.....
and they were out of my coffee creamer too.

So I sat down on the floor
right there in the middle of the dairy aisle
and with tears streaming down my face I drank copious amounts of whipping cream and began to sing Swing Low, Sweet Chariot to make myself feel better.

Ok.
No I didn't.
I'm not that far gone yet.
But what I did do was push my nose against the glass and peered straight through the milk into the back storage room desperately seeking any box that had the words "Coffee mate" and "Coconut Creme" on it.
It didn't take long for an employee to notice the apparent tragic look of desperation on my face and offer assistance.
I hugged her and explained that I needed my creamer.
Like camels need water.
Like people need oxygen.
I. Need. My. Creamer.

And so it was that I begged her to go into the storage room and seek liked she'd never seeked before to find me some.
Certainly there was a box in there somewhere.
This is America people.
We sell 872 varieties of cereal and 491 varieties of toilet paper.
There simply must.be.creamer.

Instead
because she clearly doesn't know me
what she did was to begin to offer me other flavors that were right in front of me.
"Well maa'm have you tried the vanilla bean?"
It's quite good.
"Or the carmel macciato is very popular."

And as she continued pointing out other flavors
I simply looked at her and blinked.
I had no words to offer this lunacy that she was suggesting.
Blink.
Vanilla almond?
Blink.
French Vanilla?
Blink. Blink.
Hazelnut?
Blink.
It was at about the fifth suggested flavor that she realized that I was alternating between silently blinking at her and pressing my body ever further and further into the dairy case itself to look into the back room that she realized the true enormity of the situation at hand.
Middway through her suggestion that I try new girl scout thin mint flavor she abruptly stopped, regained the use of her faculties and dashed into the back.
I watched her searched.
I kindly pointed through the case in what general direction I thought I had seen the word "Coffee" on a box.
And eventually
she found it.
And she brought one bottle out for me.
And music played
and glitter rained down from the celing.
And I hugged her and promised her my first born.

Today however,
today is a day.
P-Dub posted this yesterday.
Butter.
Butter in your coffee.
BUTTER IN YOUR COFFEE???!!
We are definitely living in the end times.

Just so we are clear....some things that I love:
Ya'll.
I'm so trying this.
TODAY.

I'll update later today with how it went.
Butter. Coffee. I can't wait!