Q: How is Joshua doing, what is his health status? I think about him a lot.

A: Well, first let me say thank you.
That blows me away.
That. really Blows. Me. Away.
I am ever convinced that if not for the covering of prayer over that boy in the last year he would not be here today.
Going from this phone call to where we are now just a few months later still makes me boo-hoo.
And hoo and boo.
And boo hoo hoo.
His experience has forever changed the way I look at life, death, and all those tiny moments in between.

So to answer your question, he's doing fantastic! Fan-stinkin-tastic. If you were to see him on the street, at the playground, on the baseball field you would have no idea what he has been through.
Truly, no idea. 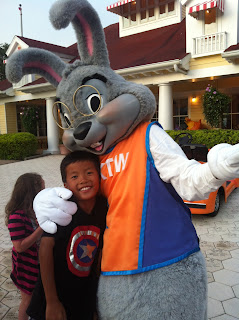 He looks, acts and almost runs now just like everybody else.
Ok.....well that's not exactly true.
He still puts his clothes on backwards and/or inside out nearly everyday,
has a nasty keloid scar, that I swear grows by the day, racing down the middle of his chest,
pees all over the toilet seat,
and thinks he can have chocolate cake for breakfast.
BUT, other than that...totally normal.
And hey, who doesn't want cake for breakfast?!

His scabs/scars/bites/whatever the heck that was, have healed on his legs. 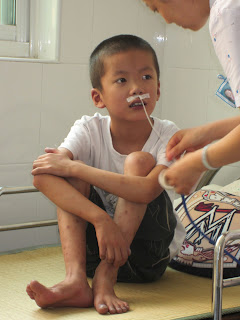 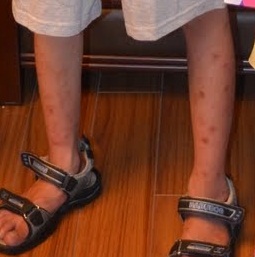 His gait is remarkably improved. I can't remember if I ever shared this but the day after he landed in the US they did a head CT in the hospital to see if he had a stroke at some point due to his largely abnormal gait. I remember that time as a bit of a fog. He had just landed the day before, we had barely slept that first night in the hospital and I just couldn't for the life of me wrap my brain around the word, "stroke."
Heart yes.
Stroke? Heck to the no.

I somewhat noticed the awkwardness of his gait when he got off the plane and walked to the bathroom at the airport and in truth I was probably making excuses for it in my head.
Long flight...
tired...
couldn't really stretch his legs at 30,000 feet....
but the doctors really noticed it. He would drag his left foot behind him when he walked. The CT scan was negative and that awkward walk is now gone, and he can almost run with a normal stride.
Holla.

We head back to our favorite cardiologist and his incredible nurse in late September for his next checkup. But for now, we just wait.
Wait and live.
Live and wait.
At some point his new pulmonary valve will fail and it will need to be replaced. The valves can fail in a matter of a few months or a few years, there is just no way to know. His has been happily hanging out beating with his heart for exactly 10 months {today!} now.

He has a Contegra that looks a bit like this:


"The Contegra pulmonary valved conduit is an animal jugular vein that contains a valve with three leaflets that are similar to a human heart valve. It’s designed to allow blood to flow freely from the heart’s right ventricle into the pulmonary arteries which lead to the lungs."

It's working beautifully for him. One of our main concerns is our transient lifestyle with the Air Force....I really, reeellllyy want the same cardiac team caring for him the second go round. They know him, they love him, they have cared for him since he was sick and blue with O2 sats at 60%. The thought of having to start over with a new team makes me shudder. So we hope and pray that God will make a way for us to be able to stay where we are for awhile....a good long while.
So that's the what's what on Joshua!

Q: So, do you ever say "kitchen is closed" for the night? I've tried that with my boys, and they just howl laugh at me:)
Do they have chores? or do you just like 'doing' for them?

But truthfully, though I don't ever say it, but I guess it's just sort of implied. I make frozen waffles and pour cereal cook breakfast, I cook lunch, I cook dinner and wash and chop some fruit throughout the day as snacks in between. But once the day is done.....thassit. And mercifully they are old enough to scavenge on their own in those late night hours when this momma is not cooking one more thing. Cereal makes a great filler for growing boys, as does hot sandwiches. We just got a Panini maker  recently and the teens are having a grand ole time loading it up with whatever filling they find. If you've got ever hungry teenagers roaming around your house load up on some good bread, meat, cheese and 1 panini maker. You can thank me later.

Chores, Chores, Chores? Yes. Yes. Yes!
They are all expected to keep their room decently clean and they each have a small daily chore. The twins load and unload the dishwasher, the teens take out the trash and recycling and the Asian Sensations take care of the play room.

We don't ask much of them as they do have a lot going on during the school year, so instead we stress that their current job is comprised of 3 things:
That is where their focus should be. And if that means I go in and pick up 18 pairs of dirty socks strewn around the house and wipe toothpaste off the sink myself, sobeit. Taking care of this nest is my current high paying job, and it's one I {mostly} love.....sans cleaning toilets. Blech.

I will say/admit/confess that I do go in their rooms after they've left for school and make their beds, tidy up and vacuum.  I feel so much better when this house is clean and orderly and though they "clean" their rooms they don't mommy clean their rooms and with so many people living here it is important....and frankly essential to my ability to care for all of them, that things stay organized and clean.
I think that is what is makin me crazy these last two weeks of summer......kids and mess e.v.e.r.y.w.h.e.r.e.
I feel like I can't catch up......ugh.

As far as allowance they get paid weekly the amount of the grade that they are in.

i.e. Jason is in 10th grade thus he gets $10/week.
Jordan $9 for 9th grade, the twins $5, and so on.
I find it to be a good reflection of the amount of money that suits their current wants & extravagant needs. $40/month is a good amount of money for a high school sophomore. $20/month is a good amount for a 10 year old boy. $8/month seems fitting for a 2nd grader. It seems to fit, it seems to work.

Additionally each of our kiddos has their own bank account. And each Sunday when they are paid their allowance, they have the option of putting some or all of it into savings.
Whatever they choose to save, we match.
So, after tithing, if Jason for example, decides to keep $5 of his $10 allowance that week for spending money and save the other $5, we then kick in $5 of our own thus doubling his saving effort.
He saved $5,
we matched it,
so $10 goes into his account.
We have found this to be a great way of encouraging saving rather than spending and is building a long term bank account for them that they can use when they leave our home. Though we didn't ever attach an age or a time frame to their long term savings, they just know that it is untouchable to them right now. And somehow, that seems to work. They don't ask for it, but are instead thrilled to watch it grow.

So that's the what's what on how we roll around here.
More FAQ comin up tomorrow...
I'm going to tackle the "New Normal" question.
But first I am summoning the courage to answer that honestly.
I'm guessin honesty is what ya'll are here for.
So buckle up.
We gonna go.

My monthly post is up on NHBO today. If you wanna check it out you can do that right here.
It's about Jacob's experience of finding out what an orphan is.......not my favorite evening but I am anxious to hear your feedback if you've had a similar experience.