Confusion is Reining in Our Home.....

Friends that have lived in China for 13 years
that are here for a year on sabbatical
and are
of course
fluent
in Mandarin.

It was such a great evening!
I made tacos
because really,
what's more Chinese than ~ ahem ~ tacos.
And once the boys got over their initial shock of perfect mandarin flowing out of the mouth of a very white American man they opened up
big time.

Had I even known how downright confused and lost my precious boys were I would have had them over the day after we returned home.
Jet lag and all.

We found out so much that night.
Some good.
Some not so good.
Some downright awful.
Things that, as their mother, I am still processing.


You could have sucked the life right out of me when those words came out of their mouth and
I'm pretty sure a piece of my heart shattered at that moment.
Sweet, sweet boys.

They are going to be your parents and love you and take care of you forever they were told.
"Impossible." Jacob answered.

He wanted to know if we were "happy with them".
As if we were still trying them on for size and about to activate some kind of return policy.

Sweet boy.
Sweet innocent boy.
If only you knew the depth of the love that we have for you.

At one point he began to catch a glimpse of that secure future and somewhat understand; and the look on his face when it dawned on him that he really does get to stay was a moment I shall not soon forget.
He.
Lit.
Up.

We had some funny moments mixed in with some things that were very hard to hear.
Funny things like, when they were told about our upcoming move, they said that we had too much stuff and there was no way it was going to fit in our new house.
Would the toys come with us?
The swimming pool?
The clothes?
The couch?
The window blinds?

When we found out that Joey has been having nightmares we told him that he could come into our room and wake us up, or call for us and we would come comfort him.
He liked that idea.
And for curiosity's sake I asked our friend to ask him what he did in China when he had nightmares.
Joey's response was that one time he got up to go tell his foster parents but one of the other boys told him not to go in there because
they
might
be
making
a
baby.

So the apparent confusion and silent chaos that they were living is ever so slowly being replaced by truth.
Replaced.
By.
Love.
.....and from that....there's no going back. 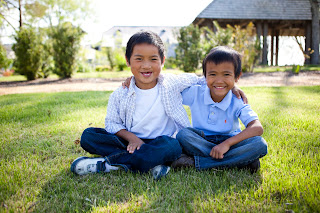