I kinda checked out of blog land for a few days
we were busy at our villa in the south of France
sailing the shores
drinking in the wine
and savoring the last few days of summer.
Ahhhh.
It was just what I needed.

And then I woke up.
And realized that I don't have a villa in the south of France.
Nor have I ever been to the south of France
and the wine I was drinking in was a grape juice stain on the carpet from one of these children
and the sailing was me making boat sounds while listening to the giggles of two small Chinese boys that are still enamored with a bubble bath.

Oh well.
All that there fancy vactioning would probably go to my head anyway.

Anyhoo.
Been a big week around here.
Someone turned 8! 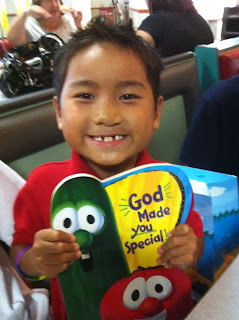 He chose a special lunch at, of all places, the BX food court
so we picked up daddy and chowed on some yummy China food. 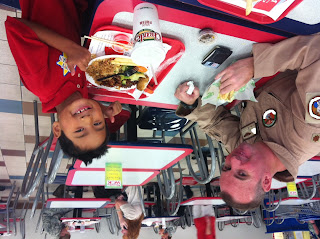 Apparently we ate upside down.
I can't get this picture to flip for nothin. 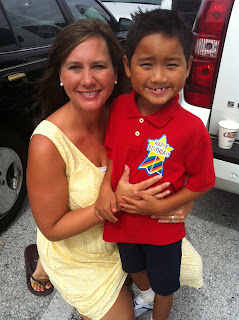 Poor child has watched every other person in this family sans his daddy have a birthday since he has been home.
You know what cures the I've never had a birthday party my entire life blues don't you?
Yep.
Our nemesis friend Chuck to the Cheese.
He.Had.A.Blast. 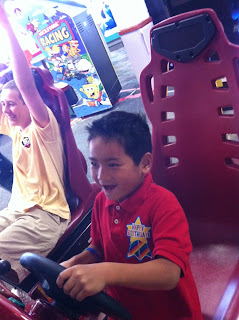 ...even if I didn't pay for the official bday and instead smuggled in some cookies, capri-suns and chips.
Hey.
Don't judge me.
My mortgage at the villa is pricey.

In sad news we did not get our TA last week as expected.
~sigh~
We do, however, expect to receive it this week so I'm thinking John boy may be on a plane on Friday.

In the opposite of sad news this girl continues to amaze me.
Her mom is pretty cool too.
They made these ridiculously cool bumper stickers: 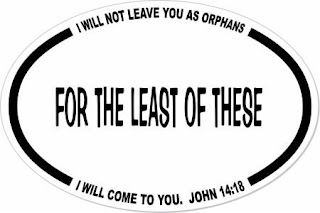 I know. So cute right?
They are selling them for us($5) as a fundraiser to get JJ home.
Hello.
Incredible.
If you'd like one go here for the deets.
I only wish I had the clarity of thought and purpose for my life when I was her age.
She exemplifies 1 Timothy 4:12 to me
"Don't let anyone look down on you because you are young..."
That girl amazes me.

Thank you SO much for all of your suggestions regarding the hospital chart.
You guys are da bomb diggity.

While talking to a dear friend of mine from our last assignment the other day we were catching up on all that has transpired this summer and I remarked to her that things were definitely on the upswing on a number of fronts in our family.
I began to explain that all we had ahead of us now was settling into our new home, a trip to China, bringing Joshua home, the hospital stay......it was at that point that I quit talking and realized how ridiculous that sounded.

If all of that is considered the upswing then this has been a rough summer.
Which it has.
But we won't dwell on that.
Did I mention I both loathe and love moving from one base to another every couple of years?
No?
Ok.
I loathe and love it.
There.
nough' said

About a month ago Joey asked for a free barnyard app on the iPod.
I installed it and then proceeded to hand it back to him.
Unbeknownst to me my supah secret password was still active at that point.
It was then that my non English reading homeboy proceeded to rack up a $300 bill in real money feeding his virtual horses and buying virtual pigs for his virtual farm.
I virtually nearly had a very real breakdown when that bill from iTunes appeared in my email a week later.
We appealed to the good folks at Apple and they forgave our very real debt to them.
Thank.You.Jesus.
I have never been so thankful to not be paying for virtual hay and pig slop my entire life.

Joey had his appointment at the specialist on Friday.
She asked to see his papers.
I refused.
She asked again.
I refused again.
And at that point, I took your suggestion, and turned to the waiting room full of children and loudly yelled that I would produce his adoption papers as soon  an everyone else provided their child's birth certificate.
And then for emphasis I tore up the check in sheet
crumpled it into a ball
and threw it at her.

Ha.
Ok.
Just kidding.
I don't roll like that.
I roll with Jesus.
She didn't ask for them.
But he is going to have a little.....ahem........procedure done and the nurse did say that we should bring his papers to the hospital that day just in case they are needed.
Guess I'll cross that bridge when I come to it.

I think that's it.
Whew.
That'll show me to take 3 days off from blogging.